A few simple tweaks to your KiwiSaver investment, like choosing the right fund or setting a higher contribution rate, can have a big impact on the amount you save. The KiwiSaver Navigator tool was built to help BNZ customers see what a difference these small tweaks could make.

BNZ has been in the business of helping their customers make their goals a reality for over 150 years and is an integral part of New Zealand life. KiwiSaver was designed to help people save for retirement and BNZ are committed to making sure their customers are getting the most out of KiwiSaver by maximising their savings potential.

Prior to the introduction of the Navigator tool, BNZ branch staff found KiwiSaver conversations difficult. Forster explains “a particular challenge was navigating the boundary between providing class and personalised advice. The purpose of the tool was to give our staff the confidence to have a discussion that provides the customer with all the necessary information to make decisions. We’ve introduced this with the primary goal of improving customer outcomes!”

The solution: a custom Engage tool

The focus for the solution had to be about delivering a better customer experience and, ultimately improved outcomes. BNZ worked closely with OMNIMax customising the Engage tool with BNZ look and feel. User feedback was incorporated to work through several iterations before the solution was finalised.

While the OMNIMax team were building the application and database, they worked in house with BNZ to deploy the solution within the BNZ Azure environment. Forster notes that the collaboration was a great success delivering a rich and robust user application within a very short time frame.

He also states “BNZ staff are now better equipped to have quality conversations with our customers on the benefits of the BNZ KiwiSaver scheme and the impact of customer choices on their outcomes. The tool is a meaningful step forward for us in helping our customers to understand a complex wealth product. Customers are better equipped to choose an appropriate fund for their situation. It also enables them to see the impact of other variables, including different contribution rates, and to generally understand the BNZ KiwiSaver scheme better.” 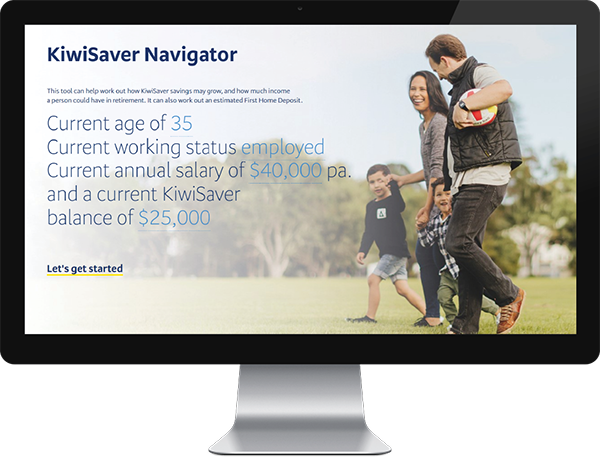 The impact on the fund choices members are making

For BNZ the introduction of the tool has had an immediate impact on the fund choices their members are making. They have seen an increase in the percentage of members opting for the Growth Fund option. This option is generally more suited to customers with a long investment time horizon. Forster also notes that the BNZ team have seen other indicators of more informed fund selection. For example, the bank has seen “a smaller percentage choosing to invest across multiple fund options. This is a move that generally does not improve diversification when the funds themselves are already diversified.”

The BNZ KiwiSaver scheme recently won the Financial Services Council award for Improving Consumer Outcomes. Forster talks about how the KiwiSaver Navigator tool was an important part of their win. “The award judges were told how the tool helps our staff have quality conversations and about the way the tool provides our customers with the right information to make better decisions. This award was a great validation of the hard work we have been doing to improve our offering for customers.”

Conclusion: positive customer feedback and over 7000 uses in 3 months

The team at BNZ have noted a strong and steady stream of positive comments from their customers. One BNZ customer praises the tool saying “during a financial health check the Banking Advisor showed me how much savings I would have at 65 years old if I continued with my current contributions. That was an eye opener, I almost felt panicky. She then showed me the difference it makes if I just put in ten dollars per week in voluntary contributions. That’s only the equivalent of two coffees a week and it made a huge difference! Awesome!”

There has also been an impressive uptake in the use of the tool from BNZ staff, with around 7000 uses of the tool in the first three months. BNZ staff are also finding the tool an invaluable asset, “after doing the KiwiSaver Navigator training I started trying out different scenarios for myself and my family to see where I’m at with my retirement savings. That was a bit of a shocker as it was far away from what I had envisaged. When I played around with the contributions I realised that I can still get there and live comfortably in retirement. It was a big relief. I realised that I only needed to change my contributions a little to significantly up my savings. It will even be achievable to buy that house earlier!”

Forster and the BNZ team know that a few small KiwiSaver tweaks can have an enormous impact on consumer outcomes. Now, with the KiwiSaver Navigator tool, they have another compelling way to give their customers the right information to make informed choices.

BNZ staff are now better equipped to have quality conversations with our customers on the benefits of the BNZ KiwiSaver scheme and the impact of customer choices on their outcomes. The tool is a meaningful step forward for us in helping our customers to understand a complex wealth product.

“The financial plans I do are comprehensive and were taking me around 6 hours, with my custom OMNIMax solution it takes me just half an hour.”

“We’ve greatly reduced the time associated with each client due to the automation and digitalisation of our workflows.”

“It’s so easy and simple – we’re finding it 60-70% faster. The solution gives us the ability to deliver quality personalised advice at scale.”